Participants performed an incentivized switch task, where they repeatedly responded to  target characters, which could be letters or digits, depending on the task they were instructed to perform in each trial (Letter task or Digit Task). The trials followed a predictable pattern, alternating between switch trials (where participants had to switch from the Letter to Digit task, or vice versa) and repeat trials (where they did not have to switch tasks).

We first examined whether people with high EBR (indicative of higher levels of dopamine) were more prone to performance decrements than people with low EBR (indicative of lower levels of dopamine). Our findings indicated that people low in EBR were generally capable of improving their performance after the incentive manipulation, whereas people high in EBR were not. 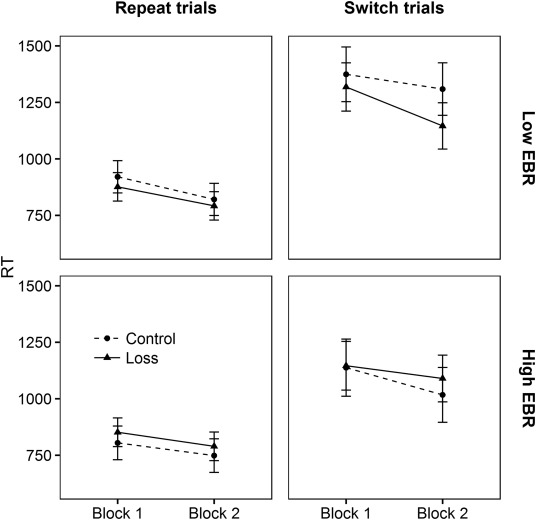 What about hemispheric asymmetry?

We further investigated whether the incentive-triggered effect on performance was moderated by hemispheric asymmetry. However, we did not find any evidence for this idea.

In the current study, we showed that people’s failures to improve their performance (by receiving incentives), are moderated by individual differences in eye blink rate. So, when incentives cause poor performance, this may well be the work of the ascending dopamine pathways.

Although the existence of ‘choking under pressure’ is well-supported by research, its biological underpinnings are less clear. In this research, we examined two individual difference variables that may predict whether people are likely to perform poorly in high-incentive conditions: baseline eye blink rate (EBR; reflecting dopamine system functioning) and baseline anterior hemispheric asymmetry (an indicator of goal-directed vs. stimulus driven processing). Participants conducted a switch task under control vs. incentive conditions. People low in EBR were generally capable of improving their performance when incentives were at stake, whereas people high in EBR were not. Hemispheric asymmetry did not predict performance. These findings are consistent with the idea that suboptimal performance in high-stakes conditions may stem from the neuromodulatory effects of dopamine.