Resisting aggression in social contexts: The influence of life-course persistent antisocial behavior on behavioral and neural responses to social feedback

What was our research question?

Why do some people show persistent antisocial behavior into early adulthood, while others desist from this trajectory? Does it matter how they respond to social feedback, both behaviorally and neurally?

In our study, participants with different antisocial trajectories (i.e., persistent, desistent and no history of antisocial behavior) performed the Social Network Aggression Task (SNAT). This task allowed us to examine how they responded to different types of social feedback.

What did we find?

As in prior studies, we found that people tend to respond with more aggression after receiving negative feedback (indicated by them sending a louder noiseblast to a peer). However, people with a persistent antisocial trajectory did not respond in an even more aggressive manner. 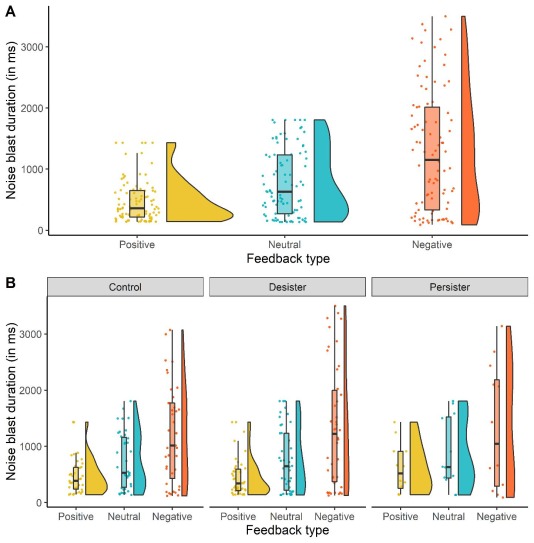 What did we find in the brain?

When we looked at neural responses during feedback processing between persisters, desisters and controls, we found that persistent and desistent antisocial development was associated with similar and dissociable neural activity:

Participants with a persistent and desistent developmental trajectory both showed increased insula activity during feedback processing, regardless of feedback type. This may reflect increased salience of social cues, or increased processing of self-relevant information.

We also found that people with a desisting trajectory recruited the dlPFC more strongly during general feedback processing. This may reflect increased attention to changing task demands, which supports cognitive control or emotion regulation to choose an appropriate response. 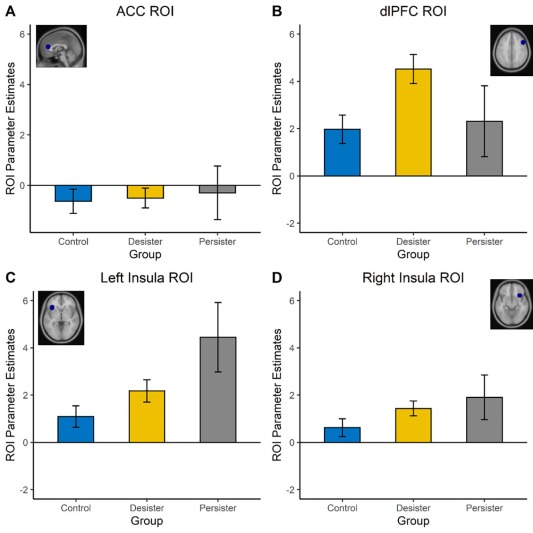 We also explored neural responses during retaliatory behavior (i.e., blasting the noise). We observed increased activity in the dlPFC and ACC specifically for positive feedback. Hence, these regions might be involved in the inhibition of retaliation following positive feedback.

In line with this idea, whole brain regression analyses confirmed that successfully being able to regulate aggression after social acceptance was associated with increased activity in the ACC. 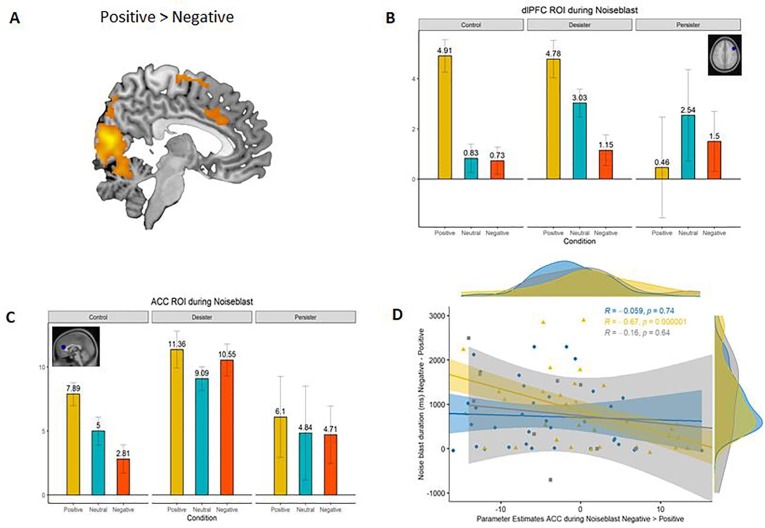 Early adulthood has long been recognized as a potential turning point for the development of antisocial behavior, due to changes in social contexts and ongoing psychological and neurobiological maturation. However, it remains unclear how different developmental trajectories of antisocial behavior, their neural underpinnings, and individual differences in psychopathic traits may help explain the distinct developmental outcomes of individuals who persist in or desist from antisocial behavior in early adulthood - such as how they respond to others in social contexts. Therefore, in the current study, young adults (aged 18–30, 68% male) with a persistent or desistant antisocial trajectory (N = 54), as well as healthy controls (N = 39), completed the Social Network Aggression Task, during which they received positive, neutral, or negative feedback on a personal profile and got the opportunity to retaliate by blasting a loud noise. On a behavioral level, results indicated that in all groups, negative peer feedback evoked higher retaliatory aggression, compared to positive and neutral feedback. On a neural level, when receiving social feedback, individuals with persistent or desistent trajectories showed both similar and dissociable patterns of neural activity; desisting and persisting trajectory groups showed higher activity in the Insula, and the desisting trajectory group showed higher activity in dlPFC. Finally, when participants retaliated, they showed increased dlPFC and ACC activity following positive relative to neutral and negative feedback, where ACC activity correlated most strongly with inhibition of retaliatory responses in the desisting trajectory group. Together, these findings provide novel insights in dissociable patterns of brain activity that may increase our understanding of the mechanisms underlying different developmental trajectories of antisocial behavior.